As runners we all know the feeling of needing to use the bathroom at very inopportune times. It happens, we try to mitigate by getting up earlier, drinking and eating appropriate foods at appropriate times, planning bathroom stops into our runs, and making A LOT of shit jokes. Because, shit happens!  I have had issues with "taking a Spellman" as my Akron run family likes to call it, for quite some time in training runs.  Every once in awhile it would happen in a race, but it was usually a fault of my food choices prior. Then a few years ago it started happening more often in races, like in ALL races over 10k. I knew the catalyst was the type of calories I was consuming while running. But I went to a Dr. to make sure.  After many tests, the answer was, your shitting because of the gels. So I sought new gel options, with no success. I quit taking them in training, because every training run was stop, go, stop, go, stop, GO!  I eventually started to rely on Immodium to STOP the shitting. Because I needed fuel. The Immodium upset my stomach, but I wasn't leaving a mess all over the streets, so win...right?  Wrong. I would then feel terrible for 2 days post race with stomach pain and needing to clear out, all I had stopped up. Not shitting, was shitty too.

This summer I was super lucky and got to go spend some incredible weekends hanging out with my Oiselle Volee teammates at a few Bird Camps.  After speaking with the ladies in Wisconsin, our conversation turned to the "shitty" side of running, literally. We talked about our woeful GI moments for quite some time. The following morning, during our long run, I suffered from another bought of needing many bathroom breaks after taking my gels. I was in a lot of GI pain for 3-4 hours following the run. We didn't have great cell service, but I told myself I was going to find something different when I got home. I was sick of half of my weekend being spent worrying about shitting, and the other half being spent actually shitting.   So a few days of searching, reading about how XYZ brands were different, only to compare ingredients and feel let down that they were including darn near the same things. I came across Spring Energy.  I read the ingredients and felt excitement!  It was just plain and simple food!!


A few days later I had them laid out on my counter for the following mornings tempo.   I had 2 "Long Haul" gels and one "Power Rush" ready to slip into my Koala Clip (a wonderful phone carrier made by a Oiselle Volee, that happens to be awesome for gels too!) and tuck into my stride shorts in the morning.   I took one "Long Haul" during my warm up. It was different than other gels right away. It was a little chunky. But the taste was good. It had a subtle taste of peanut butter, and it wasn't overpowering and went down very easy for me.  40 mins later I had warm up and 4 miles tempo behind me and took another "Long Haul".  To my surprise and sheer excitement 2 miles later I still had not needed to shit!  With 2 miles left of tempo effort,  I took a "Power Rush" this was plum and also somewhat chunky.  The subtle taste was great and again went down easy with no weird after taste!  I arrived back at my house 15 miles later, and couldn't stop talking about how excited I was about this. I haven't used a gel and not shit myself in years, I wouldn't have dreamed of taking 3 gels on a run that was shorter than a marathon.  I could hardly contain my excitement.  I had a 28 mile day on tap later that week and I knew that would be the real test. Well you can guess what happened since I am writing this post. I took a total of 3 "Long Hauls", 2 "Power Rush", and 1 "Hill Aid", and 2 "McRaecovery"  during the duration of 28 miles and recovering between and after.   I never had an GI issues. That right there is no BS!  100% no bull shit, as a matter of fact, no out of place shit at all! I could hardly contain my excitement and after a few conversations, I was honored to announce I would be an ambassador for the Spring Energy Brand. 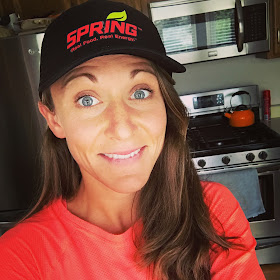 Spring Energy nutrition is different. The "flavors" (which are just the flavor of the food that is in each gel) each have a specific purpose. Unlike most gel brands where you choose any flavor option, and get the same gel with different flavoring and coloring added, Spring Energy gels are real food specifically designed for times and circumstances within race and training settings.  There are different needs for different demands and Spring Energy's gels are designed to meet them. Below you will find a diagram explaining!


I have been asked what I like, and what is my favorite flavor.  In all honesty I like the taste of all of the products. In particular, I love the taste of the Mango "Hill Aid", and I think the "Electroride" drink is addicting. I love it. But what I really love is the food itself. It is just food, plain and simple.  I believe this is what I had been searching for.  If you are looking for a brand that makes nutrition that is food, or won't mess up your GI tract I strongly suggest giving Spring Nutrition a shot. If you are struggling through trying to figure out what will work for your in your upcoming races, grab a variety pack, and I believe you won't regret it.  It has been awesome for me, and I am so thrilled to be a part of the #springtribe! You can use code "BeckiS" for 10% off your purchase!  If you have any questions Myspringenergy.com is full of videos and information, or you can email me at beckispellman@gmail.com

Follow along for race updates as I run the half at the Akron Marathon on September 23rd,  followed by the Columbus Marathon on October 15th! I am excited to race, and watch all my teammates and friends tackle their fall goals over the next few months!